THE GIRL WITH ALL THE GIFTS by M.R. Carey and Narrated by Finty Williams is a horror novel with a new (to me at least) slant on the ever popular zombie apocalypse.  This time around we are met with a civilian medical research team located in a protected military outpost attempting to find a cure for the fungal pathogen responsible for the zombie outbreak. 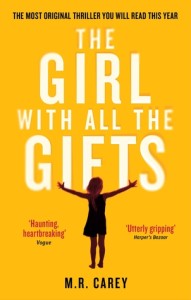 GIRL is a beautiful and touching piece with bits of horrific imagery for flair. One of our protagonist’s, the young Melanie’s desperate longing to be loved by her teacher Ms. Justineau is simply heart wrenching.  Likewise Ms. Justineau’s compassion for her class was spot on for her character. Aside from Dr. Caldwell all the characters took on real depth. Caldwell’s single-mindedness, however, is very much in character so I don’t believe this is a flaw in writing or editing.

The tale takes us on a journey from the remote outpost to Beacon, which is the major city/base for humanity in England. Along the way we see the small group wrestle with their own flaws and try to survive, pressing-on in hopes of Dr Caldwell finding a way to cure the plague. This is a tale of attempted redemption or reconciliation and I felt like a commentary on what it means to be human, and to love.

I very much liked Ms. Justineau’s character. As someone who often thinks I’m missing out by not raising a child, Justineau’s commitment to Melanie’s safety touched home. Also Ms. Justineau showed some satisfying bad-assery at times, although she did get to the point of being a flat out bully. Again, I didn’t care much for Dr. Caldwell. Her focus on finding a cure led to some pretty nasty things and I think this speaks to what it would mean to leave humanity behind while trying to save it. There are times I think her aim was simply selfish glory rather than good intentions.

I’m not a deep thinker so I bet there is lots of commentary going on here that I am overlooking. Perhaps something said about the mentality of survivalists, on display here as The Junkers, and where that could lead should the real world take that turn for the worse.

M.R. Carey’s writing came across in the narration as very fluid and natural. All the dialogue seemed on point and no filler content to speak of nor overdone world building. There were times where Dr. Caldwell sounded like a broken record and Ms. Justineau as well but again I think that speaks more towards their characters commitment to their individual causes than an oversight in editing or revision by the author.  The reader/listener is presented with some pretty ghastly sites and the overall tone of the story feels very real. Finty Williams’s clean and crisp narration lends to this well.

Overall I felt THE GIRL WITH ALL THE GIFTS was a delight. When I understood it was a zombie novel I expected a horrific-action-romp, not to *feel*. I don’t have children, and likely never will, but if I did I would want them to be like Melanie… except maybe not the whole wanting-to-eat-my-face thing.

1 thought on “THE GIRL WITH ALL THE GIFTS by M.R. Carey – Audiobook Review”

This site uses Akismet to reduce spam. Learn how your comment data is processed.