GEMINI CELL by Myke Cole and narrated By Korey Jackson is Cole’s prequel to his Shadow Ops series which is military urban fantasy.   If you relish the thought of a zombie navy seal performing a tactical assault with some superhuman feats of strength, intrigue, and a pinch of gore for added pizzazz then look no further.   And if that’s not enough Cole has cleverly camouflaged the book so you’d never suspect it’s really… a love story. 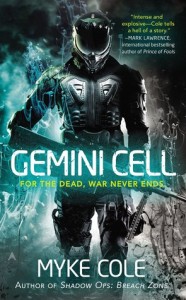 I’ve listened to all the previous Shadow Ops installments so I was ready for the thick helping of military life, well explained jargon, and of course combat Cole delivers. The listener is given a window into the orderly chaos that is military service and the consequences to that service member and their loved ones.   The angle Cole takes with the book keeps the story fresh. The pace is quick and the action set pieces kept me wanting to see what was going to happen next. In fact, I listened to this in entirety in one go.

The Shadow Ops series are particularly special as the author gives us a fresh take on the modern profession of arms. It’s worth noting in GEMINI the magic is primarily on display in the form of resurrection, enhanced strength, and body morphing. You won’t see teleporting, fireballs, or accelerated entropy here although some of it is referenced.

Our primary protagonist is US Navy SEAL Jim Schweitzer. Schweitzer’s team is dispatched on an operation aboard a cargo ship where they find frozen bodies being transported for yet unknown reasons. Despite a hiccup or two the operation is a success and Schweitzer goes home to his wife and kid. During the night Schweitzer’s home is attacked and he and his family are gunned down apparently in retribution for the earlier operation. Schweitzer wakes to find his soul sharing his now decomposing body with a bloodthirsty and powerful magical spirit and together they can really kick some ass, if they can get along. I’m a fan of the pursuit of right and justice in a story so this was up my alley as Schweitzer battles the demon forced to share his resurrected corpse.

Again, GEMINI CELL is a love story in its bones. We follow Schweitzer in his journey to discover who killed both himself and his family. Unbeknownst to Schweitzer, his wife and son did not die during the attack. Schweitzer’s wife Sarah, like her husband, has a spine of steel. The Navy has told her that her husband died during the attack but she doesn’t buy it. Sarah has to work through her grief and figure out why she refuses to accept her husband’s death. There’s also a subplot involving Schweitzer’s best friend and his relationship to Sarah and her son now that Schweitzer is dead. If I had read this paragraph before picking up the audiobook I would have groaned loudly but Cole keeps things moving well enough that the action and pace didn’t suffer from the mushy-feely stuff.

Schweitzer is the apotheosis of military excellence. The man’s got fantastic physical condition, keen mind, granite integrity, and an indomitable spirit. Anyone who follows Myke Cole on twitter knows he is not-so-secretly Captain America. Cole is passionate about the military and it shines through perfectly in Schweitzer. Schweitzer is also a sufferer of PTSD and Cole gives us a glimpse how some service members are able to cope with the disease. Cole tackles the character of Sarah very well. She’s no shrinking violet which I suppose is expected since it likely takes a person of considerable mettle to tame a Navy SEAL.

Korey Jackson narrated all of the previous Shadow Ops audiobooks and his delivery is firm and voice well suited for the military tone. There are some spots where I felt the narration could have benefited from more takes or perhaps better editing but overall I appreciate his work here. Cole’s dialogue flows smoothly and there are moments of prose that are quite elegant. Cole maintains the intrigue of Schweitzer’s situation versus his family’s survival just long enough so there was no shouting at the characters to ‘get on with it’.

I enjoyed GEMINI CELL by Myke Cole. The quick action and deep love between Sarah and Schweitzer pulled the story along for a fun read. I’m ready for JAVELIN RAIN.

This site uses Akismet to reduce spam. Learn how your comment data is processed.